Alston Anaya-Hernandez and Clara Madison were among outstanding musicians from 20 schools in the Finger Lakes region who took part in the honor band on November 19th and 20th. Anaya-Hernandez, a freshman, plays the trumpet and Madison, a junior, plays the flute.

The honor band rehearsed several high-level music selections together on Friday afternoon and Saturday morning before performing a culminating concert on Saturday afternoon for both in-person and virtual audiences. The concert was held at Canandaigua Academy.

Anaya-Hernandez and Madison “rehearsed, performed and highly represented NRW at this event,” said Michael Witkiewitz, NRW band director. “I am very proud of their work ethic preparing for this event and how professional they were during the event.”

A stream of the concert can be viewed at https://www.youtube.com/watch?v=b6GknmjXGxU.

Way to go, Alston and Clara! 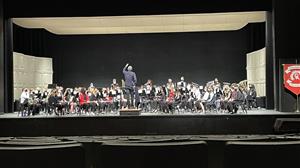